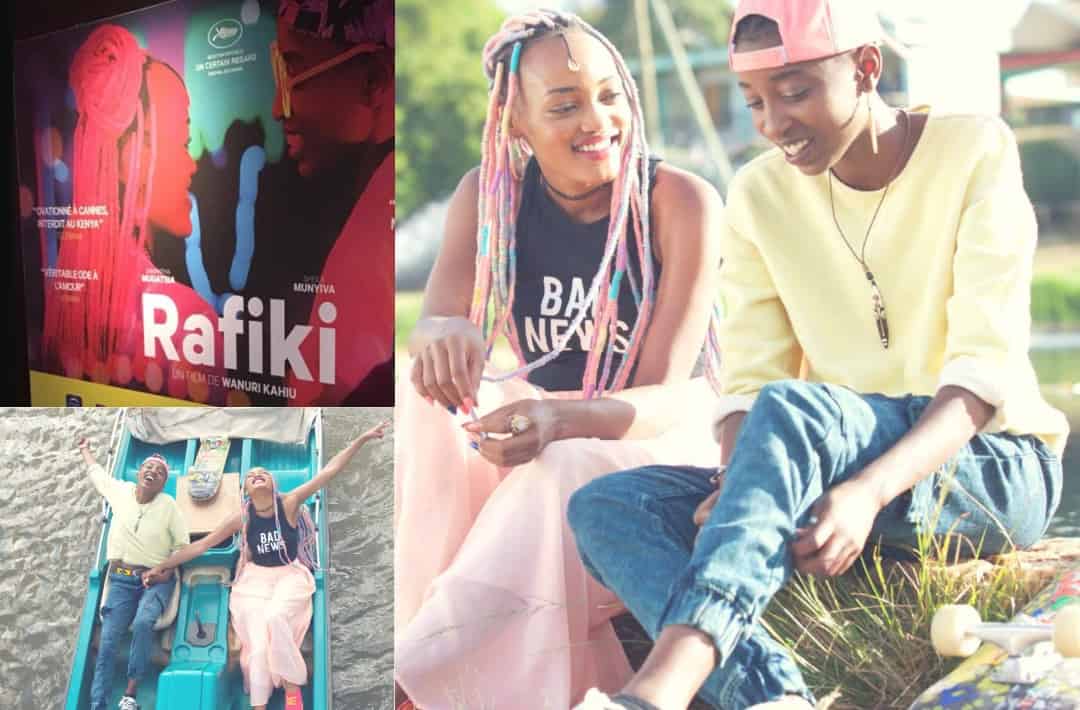 Rafiki has not failed my expectations, as a matter of fact, it has given me more reason to keep an eye on more upcoming Kenyan films. Wanuri Kahiu did an amazing job, period! I’ll tell you why.

The movie Rafiki that is an hour and twenty-two minutes long, is a narrative that sold a partly Kenyan story in both a modern and traditional way. The characters, the venue, the depiction of the storyline was completely what any normal Kenyan “outcast” could easily be facing at this point in time. Wanuri gave the movie Rafiki a raw feeling, the kind that is very idealistic.

Rafiki passes for a thumbs up. In this rare Kenyan story, there is symbolism to our Kenyan kind of family set up, religious nature, relationships, backgrounds, discrimination and political affairs. The compelling performances from the lead characters Samantha Mugatsia(Kena) and  Sheila Munyiva (Ziki)  left me wondering what next. There was evident chemistry between the two, they fit the characters perfectly; from their costumes, different lifestyles, personalities and how well they brought out the theme Rafiki.

The story narrates a love story of two young ladies who have political rival fathers. Their first encounter was due to a slight dramatic  “dad political defence’ when Ziki’s friends pulled down John Mwaura’s posters, a character played by Jimmy Gathu who is the father to Kena and is separated from Mercy the mother to Kena, a role that was well played by Nini Wacera. The two young girls, immediately kick off with a chemistry that was initially hard to predict it’s build up. The relationship gets steamy in no time, this, however, raises brows as they were political rival kids and yet they were friends. The questioning from the community did not stand for long as one day the two lovebirds were caught in between a society questionable act.

This marked the climax of the movie as the community ganged against the two ladies through public lynching. They were taken to the police station after the lynch instead of a medical facility, this highly depicts the view of Kenyans to homosexuals who are considered criminals. Later the issue of religions cuts in whereby Kena had to be prayed for due to her staunch Christian mother who viewed the act of Kena’s gayism as demon possession. The role of a single mother who is scared of being blamed for her child’s character leads to the prayer act. Ziki however, is from a well-off family and the solution is to be flown to London just to avoid a toxic ‘society’. The delicate nature of this movie vividly shows the difference between the rich and poor in society, whereby the rich politician is mentioned first as a guest in church even before the sermon, a quick reminder to the Sauti Sol song.

However, despite the raw and realistic nature of the movie, humour was not left behind. Nice Githinji who played Nduta and Muthoni Gathecha who equally played Mama Atim were a perfect match for the role of the common societal gossips. The two gave the movie a lively mood that broke the silence every minute. A common mwananchi would easily relate to these two. (Wale kina mama wa plot). The two characters, portrayed how people keep up with others in aim either to build or destroy.

The extra characters such as Blacksta played by Neshville Misati, brought out unconditional love, whereby he cared for Kena, without judging who she really is and accepted her as she is. The film has more to offer more than what could easily be termed a ‘normal movie’. It cuts across so much in society, it is one of the films every Kenyan could easily relate to and every Kenyan needs to make time and watch.

We as a people are probably rushing to run away from a truth that has perhaps crept into our society but question is, what if it could be your child, sister or perhaps the silent rumours of grown women who could easily come out of the closet? How do we define sexual orientation as Kenyans? Should this be a conversation or a truth under the carpets?

The movie did not leave out a touch of male gayism as well, the gay gentleman was called names and ill-treated. Is it safe to say that probably as a society of Kenya we view sexual orientation as a choice and since it is an evident wrong choice according to our society how then do we train on making the right choices? What should the Kenyan conversation on sexual orientation be? Or is it safe to assume that there is no need for a conversation as it’s a “no brainer”?

Sorry, no posts were found.